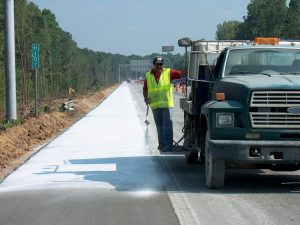 Similar to conventional concrete, RCC quality control and quality assurance requires extensive testing of individual ingredients – aggregates, cementitious materials, water, and admixtures; and testing of the RCC mixtures to determine the properties of fresh and hardened RCC. Furthermore, calibration testing of aggregate blending and RCC mixing equipment is required to confirm that the equipment is capable of producing consistent product at the predetermined proportions.

Among other factors, the type of equipment deployed to construct an RCC pavement has a significant effect on the quality of the placed RCC. To mitigate this variable, most RCC projects require placing and testing test strips prior to commencing production placement. Placing and testing a test strip provides an opportunity for the contractor to demonstrate their equipment and construction means and methods.